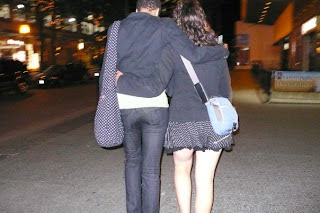 This weekend I went to the island for the annual wine festival and gigantic after party chez mes parents.

I just may have the greatest parents in the world. Not only was coming out to them SO much easier than it was for many of the people I know (no Get Thee to Reform Camp, no Well I'm Okay with Gays as Long as They Aren't My Daughter), but they also want to meet all the girls I like and get to know them and open their home up to them and hug them right from the beginning, right at the introductory stage.

My parents are so relaxed that they got drunker than I did at the wine fest. Drunk and funny. Both of them are happy, lovely, and open when intoxicated, as is pretty much everyone in my family. My mom commented wryly on the bus back up island that it was okay that everyone on the bus was gulping down glass after glass of fine Shiraz, because as the picture on the sign at the front of the bus indicated, drinking was not prohibited, merely drinking with straws.

Later my dad got hysterical over the French on a plate of raw vegetables from Costco that read: plateau de crudites. "PLATEAU DE CRUDITEEEES!" he tore through the kitchen yelling, followed by strings of expletives, in order to prove, I suppose, that he could be extra-crude with a plateau of crudites in his hands.

TG came to the island, met my parents, gave them presents, and made them adore her by doing nothing except being her charming self. We made salad and danced in the kitchen while the house was full of our friends and neighbours, using every possible opportunity to touch each other, flirting, laughing, and generally feeling pretty free.

At one point she asked me "Do you think everyone has got us figured out yet?" I said something to the effect of: "You mean, do they think we're the biggest bloody homos on the planet?" "Yeah," she said. I looked around at all the happy and increasingly drunk and merry people around us and replied: "Honestly, I have no idea. But I really couldn't care less. They all just want me to be happy" 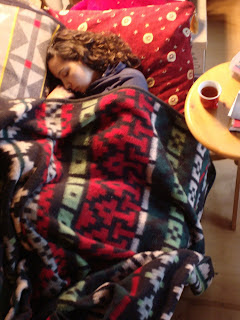 And later I found it funny that feeling like I care so much about someone has the effect of making me care less about what the world thinks. It rarely occurs to me that we're both women, except when I'm focusing on how amazingly hot and lovely and beautiful she is, or when I'm feeling like I'm looking at a Botticelli painting come to life under candlelight, which I suppose is actually all the time.

My point is just that caring about women makes me care less about what the world thinks about the fact that I care about women.

It's just home to me. And home is the safest place I could possibly live.