actual conversation between Jag and I 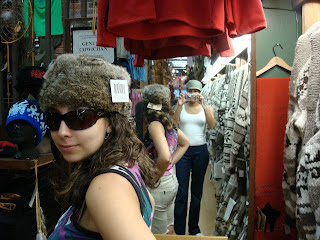 At approximately 3:00 am, upon returning from the bar, where we had partied it up with Sir Busblog himself and friends:

Jag : Wow, my clothes don't smell like smoke. That is so great.
Nome: Yeah, isn't it? So I guess they haven't quite caught on to the whole non-smoking thing over there in Holland, have they?
Jag: No, but they're going to start passing some laws. Maybe we'll get those smoking rooms that you have in Canada.
Nome: (pulls dress over head, does not hear next line of dialogue due to dress over her head)
Jag: You have some really hot boobs.
Nome: (certain we're still talking about smoking rooms in bars) Yeah, they're actually illegal.

Spent last night getting illuminated on so many levels. Smoked some weed called Rhubarb Sugarbush which Kasey had bought us. It was no barrel of Hell's Angels junk, that's for damn sure. It made Kasey crazy, caused a lot of drama, made TG into even more of a clown than usual, and made me feel super introspective and socially paranoid.

Walking alone in an East Vancouver alley in the middle of the night didn't bother me at all, but the prospect of speaking to just about anyone was quite terrifying. I probably didn't utter more than six sentences for the entire rest of the evening. All the words sounded terribly stupid in my head, and I figured since that meant they'd sound even stupider out loud, I ought not to speak them at all. Instead I tried to be a super good listener, lost admirably at poker, and even got a kiss from TG at the end of the night. It felt somewhere in between an "I really wanted to kiss you" kiss and a "hey nice to meet you" kind of kiss. I sent her a text message entirely in French, and she called me at 3:30 when I was already asleep. Plus ca change....

The weed also made me feel like I was vibrating. Not that I was receiving vibrations, but that I was them. A little action last night might have made me explode. But at least I would've died happy.

Jag was beside me dreaming that she'd married me and we'd adopted a bunch of little Asian kids. Niice.